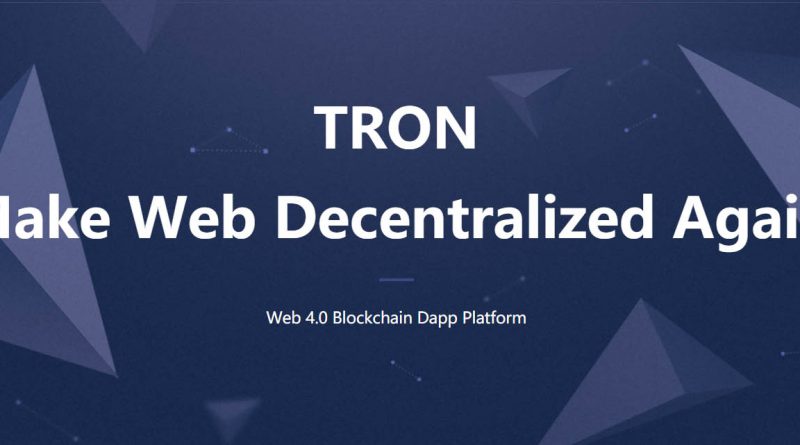 Maybe you’ve heard if you download a full-copy of a cryptocurrency’s blockchain and update it continuously, you can also earn crypto coins from that network.

Dash started the craze of running Masternodes to generate passive income and shortly after they did, the practice quickly exploded onto the crypto scene. If you’re a bit out of the loop, a quick cross-check between various sources in the industry quickly made clear that over 100 crypto networks use this concept actively and the number is growing.

The Tron Network just might become one of those networks but given that it’s only in its test-net phase, but the jury is still out. Despite this, we can draw conclusions related to the probability of Tron Masternodes through the examples of Witness Nodes as well as Tron Power tokens.

Witness nodes share some of the typical characteristics of Masternodes, including:

1. To run a Witness node, a user needs to stake a certain number of coins on the network to apply to run such a node.

2. Once you do this, you are able to help synchronize or verify blocks. Tron states that later this will include generating new blocks but does not specify when this will be an available feature.

It should be noted that the existence of Witness nodes does not directly mean that Tron will allow Masternodes in the future. Tron has no working network yet, so there is no monetary reward for running a Witness node.

Despite this, some existing users claim that another future feature of the network, which will be implemented with the network's main-net, could act as a bridge towards Masternodes in the future.

Shortly after the launch of its main-net, Tron will migrate away from using the TRX ERC20 token and towards using its native token, Tronix, full-time. Stakers of Tronix will supposedly generate Tron Power tokens, which will be non-tradable and non-sellable.

The primary benefit of doing this seems to be that the earlier a user starts staking Tronix, the more Tron Power they generate and are awarded by the Tron Network.

In addition to this, Tron Power tokens will be used for voting and for other privileges in the future Tron network, similar to how Steem Power is currently used on the Steem social network. In theory, the more TP that a user holds, the more powerful that he or she directly becomes on the network, in theory.

Therefore, these TP holders could be the biggest influencers in terms of what features get added to the network, what content succeeds and stays on the network, and much more.

Tron’s idea of incentivizing users to participate long-term in their network is noble and seems to have good intentions but it raises some red flags.

What exists to stop long-term stakes of Tronix from effectively centralizing the network under their control?

Secondly, staking Tronix for Tron Power does not generate actual income unless Justin Sun and the development team end up pulling an about-face and adding this capability later. Thus, judging by all existing information on the Tron Network, one cannot and will not be able to run a Master Node on it.

Even so, since Tron is in its infancy, such a possibility still exists and hinges on the development team’s conclusions from the test-net phase.