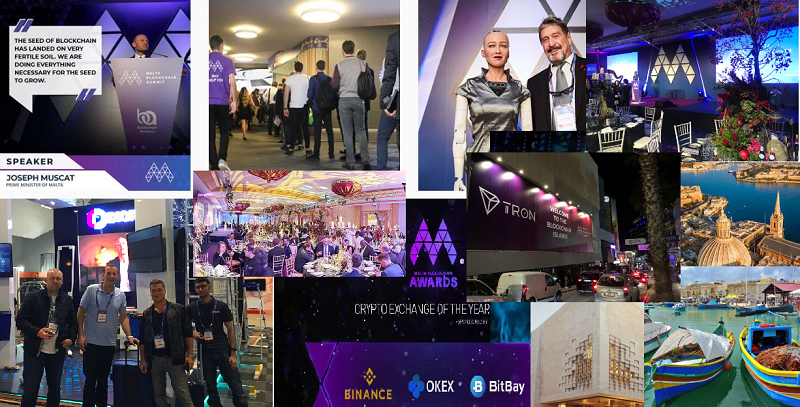 November starts off with a high note for the cryptocurrency community once the 2018 Malta Blockchain Summit finally kicks off. Taking place at the InterContinental Hotel at St Julian on the Malta Island until November 2, the event brings together blockchain and crypto investors, business people, enthusiasts, venture capitalists, banks, regulators, organizations and big names in the crypto industry. A total of more than 8000 delegates, world-class speakers, 300 exhibitors, and sponsors are expected at the event.

The two-day Blockchain Hackathon, which has attracted around 300 blockchain developers who are competing for a €50,000 (c.$57,000) prize by solving some serious challenges in the blockchain and crypto industry, kicked off last night. Each team participating in the hackathon will have 4-8 people (including two developers from whom one should ideally be a smart contract developer; ) and led by a team leader. Thirty "hottest" startups in the cryptocurrency sphere will get an opportunity to pitch their Initial Coin Offering each for 10 minutes to a panel of judges, and compete for $100,000 prize.

Malta Island has so far been impressive in terms of attracting cryptocurrency businesses with its favorable conditions. It was also hosted to 4,000 delegates who attended the October 3-5 Delta Summit which also is a blockchain event that attracted people from all walks of life. It is expected that a number of issues relating to regulations will be discussed from today at the regulatory conference.

And starting with regulation issues, three new decentralized ledger technology bills will come into force today at the summit: The Malta Digital Innovation Authority Act; The Innovative Technological Arrangement and Service Act; and The Virtual Financial Asset Act. They are expected to establish a framework which basically accepts DLT businesses as Technology Service Providers all with the expectation to protect consumers and financial markets.

These types of businesses will be recognized in the country as legal with normalized registrations and certifications. The Virtual Assets Act will provide clarity on whether a cryptocurrency or token should be categorized as security or virtual token for purposes of regulation. These bills will start to further position the island as one of the jurisdictions that have clear regulation on how to treat DLT, blockchain and crypto businesses. This would essentially remove uncertainties and commotions that come with unclear regulation that does not define specifically how these businesses should be treated.

Malta Prime Minister Joseph Muscat will give a Keynote welcome address and an overview of how the Island is positioning itself as an "Innovation Island" especially in regard to the policy covering cryptocurrency and blockchain businesses.

The government will also announce a number of incentives and attractive schemes that aim at positioning itself as an innovation hub to attract more innovations in AI, Big Data, Quantum Technology, and IoT. Besides that, five experts in areas of law/regulation, business, and blockchain, will explore how jurisdictions can develop blockchain regulation that protects customers without hurting innovation. They include Advocate and Partner at WH Partners Joseph Borg, member of governing board of the European Institute for Innovation and Technology who is also Grid Singularity's COO and co-founder Ana Trbovich, Managing Editor of the Stanford Journal of Blockchain Law & Policy Steven S. Nam, CEO of SingularityNET Ben Goertzel, and Malta KPMG Director Banking Mark Curmi.

Senior visiting lecturer at the University of Malta and managing partner at EY Malta Ronald Attard will present key results of a blockchain survey that EY conducted about blockchain in the country in the last few months. Legal practitioner Jonathan Galea who is also Managing Director at Blockchain Advisory Ltd will address the topic about directing legislation in technology and how it is happening in different jurisdictions such as Malta, Korea, Zug, and Gib. Other issues to be talked about include taxation for cryptocurrency businesses.

The developer and technology conference will discuss a variety of issues including permissioned and permissionless blockchains, use of smart contracts in dApps development, combining AI and blockchain, adoption of blockchain for businesses, centralized and decentralized exchanges, multiple chains verses multiple coins, ICOs and AML regulations, taxation of ICOs and crytpocurrencies, and what companies can do or expect at the post-ICO stage.

2018 has been the year when adoption of blockchain and crypto, in addition to regulation, took a centre stage and the discussion of their adoption in the banking and financial industry has generated quite a huge interest. Advocate and Partner at WH Partners Dr. Joseph F. Borg will join Revolut Greece country manager Dimitris Litsikakis, Marketing & Business Development Specialist Tim Frost, HOLD Platform Ltd CEO Priyanka Lilaramani, GANADO Advocates Partner Leonard Bonello, and Em@ney CEO Germano ARNO to discuss the issue of adoption of blockchain and crypto in the banking industry looking at the issue whether banks can come in and adopt.

Other speakers include the co-founder of McAfee who is also Luxcore CEO John McAfee who will discuss the "dark side of the chain" alongside two other experts, SingularityNET's Sophia Robot and the firm's CEO Ben Goertzel; and Yūgen Partners' and PhD Chief Scientist W. Scott Stornetta.

Finally, the attendees will enjoy an evening cruise from St. Julian's to Valletta's majestic harbor before the event closes at the Westin Pavillion.