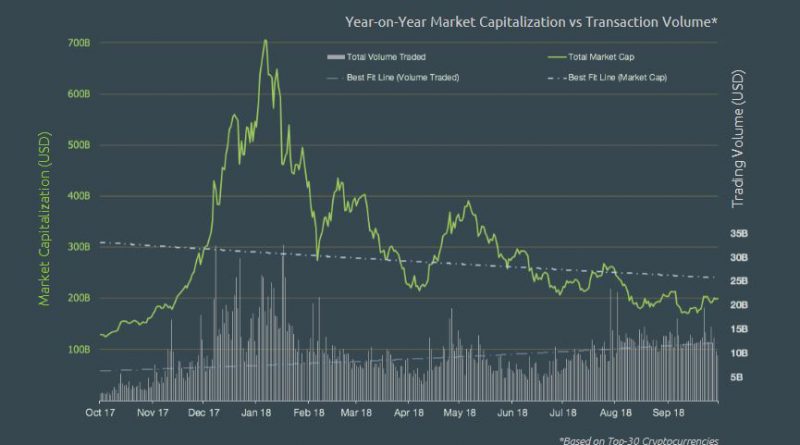 All the top five coins excluding Ethereum have made positive year-on-year return according to a report recently published by CoinGecko. EOS has so far gained a 700 percent, followed by Ripple XRP at 186 percent, Bitcoin 52 percent, and Bitcoin Cash at 28 percent. Ethereum lost by 22 percent thus far.

Many exchanges have been adopting a controversial strategy called “Trans-fee Mining” in order to boost exchange trading volume where they create a new exchange-based tokens via rebates of the exchange’s transaction fees. The report says that 12 exchanges out of top 30 so far offer trans-fee mining rewards indicating the rise of trans-fee mining and growth of trans-fee exchanges exceeding growth of those without trans-fee in the third quarter of the year. However, most exchanges are unable to sustain the trading volume of launched tokens after initial launch.

Binance led the top exchanges that have no trans-fee mining by managing a daily trading volume of more than $1.1 billion on average, followed by Huobi at $724 million and Bitfinex at $456 million. Bithumb and Dobi were also in the top 5.

Regulation was a dominant issue in news items

Regulation has become an important part of the cryptocurrency space according to the report, which adds that this has happened because crypto and blockchain have also become part of the global landscape. Even as some governments adopt regulation in favor of crypto and others not in favor of it, the authors argue that the landscape will continue to be scrutinized at a global scale. The dominance of regulatory issues was evidenced by most of the analyzed news articles in crypto and blockchain space focusing on regulation and governments in their headlines more than any other topic. Furthermore, news about governments & mainstream industries dominated headlines during the third quarter of the year compared to chatter about cryptocurrency projects.

However, CoinGecko analysis revealed that more large and sall industry players are "actively testing out products and pipelines with blockchain technology." Further, partnerships continued to be formed, and these will be "crucial driving force for cryptocurrency adoption" in future.

The report is of the opinion that cryptocurrency is impacting lifestyle given that a few headlines focused on that in the said quarter.

A lot of ICOs are falling through as investors become more savvy to invest in ICOs with higher likely of success and those that are solving real world problems such as p2p lending platforms and supply chain management platforms. ICO industry is also maturing with more projects focusing on developing business operations with blockchain technology. The report finds that most of ICO projects are overvalued and investors will sell off their stake after the tokens list on exchanges. In the third quarter, just 7 ICOs out of the 34 listed ones managed to sustain their market cap valuation above the total amount raised.

Only 8 ICOs out of which listed on exchanges in the third quarter, would have managed to profit hodling investors (based on the last traded price on 30th September) while investors in the remaining 26 would have lost money.

London Football Exchange, a football club stocks exchange, led the ICOs in terms of amount raised in the quarter, by raising $71 million. It was followed by a supply chain blockchain platform known as GSC, then a decentralized ecosystem for private internet browsing called Online.io, then Alchemy p2p lending platform, and a clean energy mining project called 4New.

Furthermore, 94 percent of ICO funds came from 10 countries: Singapore, which topped in ICO funding, followed by UK, US, Estonia, Switzerland, China, Cayman Island, Hong Kong, Russia and Malta. Besides, 67 percent of ICOs were registered in these top 10 countries, which was 43 percent less than ICOs launched in these countries in the second quarter.

ERC20 standard remained a popular choice for ICOs but there is an increasing number of tokens being issued on other platforms such as Stellar, NEO and NEM. EOS had only one successful ICO token issued on the platform in the third quarter.

Bulwark (BWK), Wagerr (WGR) and Alqo (XLQ) were the only profitable masternodes in the top ten list of masternodes based on returns from July to September. All the top 20 masternodes would have generated a median a loss return of -71 percent in the same period since their all-time high prices, with many coins losing between 80-90 percent from their peak value. The top 20 masternodes lost their market cap so far from close to $3 million in mid July to around $2 million in October.

The report also finds a growth in the number of non-fungible tokens such as Cryptokitties, EtherGoo and Decentraland. The number increased from three in late last year to a dozen in October with their combined transaction volume doubling between January and October this year.