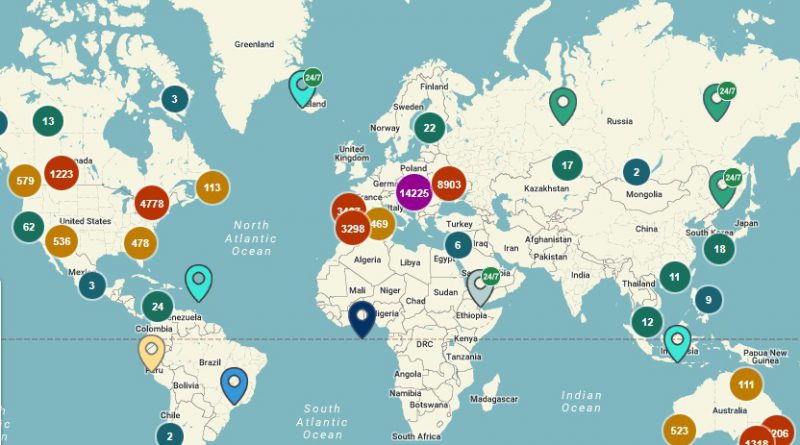 The United States, China, Japan, and South Korea are the leading markets in terms of trading volumes for cryptocurrencies such as Bitcoins. But what about adoption? America, Canada, and Europe are at the forefront of adoption for Bitcoin and other cryptocurrencies.

This is according to CoinATMRadar, which tracks about Bitcoin 2709 ATMs, 40841 related services (including those involving buying of Bitcoins without ATMs), 30 producers and 391 operators in 66 countries.

North America region has more than 75 percent of the ATMs, Europe has around 20 percent, Asia with about 2 percent followed by Oceania with 1 percent. The rest of the regions have less than 0.5 percent.

Adoption in business and trading in various cities

Again, the United States had six spots out of the top ten cities that are friendly to Bitcoin adoption in research published this March by CryptoGo.

London was fifth after Atlanta and Miami, with 118 businesses accepting Bitcoin, 74 Bitcoin ATMs, and 132 meetups. London had the second highest number of Bitcoin meetups overall after New York.

And after installation of the world's first Bitcoin ATM in Vancouver on the 29th October 2013, the city now hosts 48 Bitcoin ATMs, 63 businesses that accept the cryptocurrency and 25 blockchain meet-ups. The country ranked seventh place in the study.

As an alternative to Bitcoin ATMs, there are other ways of buying cryptocurrencies such as using existing traditional bank ATMs or mobile payment terminals as well as other retail chains that allow people to buy Bitcoins.

Asian countries such as China and Japan did not fair well although they dominate in terms of Bitcoin mining because of a combination of factors such as abundant and cheap electricity. However, cities have not many places for investors to spend their Bitcoins.

But the case is different when you consider other cryptocurrencies in addition to Bitcoin. For instance, Bitcoin holds only 40 percent in market share. These are distributed all over the world.

Manhattan in New York took the first place in terms of crypto trading volumes at 6.9 percent, followed by Chicago at 4.9 percent, Jacksonville at 4.2 percent, San Francisco at 3.5 percent, San Antonio at 3.1 percent and Washington D.C. at 2.4 percent.

Jacksonville, Florida had the highest crypto holdings per person at $31,468 according to a December 2017 report from StatusMoney. It was followed by Memphis, Tennessee with $15,748; Albuquerque, New Mexico with $12,479; Charleston, South Carolina with $9,442; and Alpharetta, Georgia with $8,382. Sunnyvale, Santa Clara, San Mateo, and Torrance, all in California, followed respectively with between $7,000 and $8,000.

StatusMoney compiled the report based on the transactions in and out of major crypto exchanges.

By trading currency, JPY led in the last 30 days in exchanges by 45 percent, followed by USD at 37 percent and EUR at 14 percent. In terms of exchange volume distribution, Japanese BitFlyer was leading in the last 30 days with 15 percent, followed by U.S.-based Coinbase with 12 percent and Bitstamp with 10 percent. Kraken, which is based in Europe, had 8 percent the same as Japanese Kraken, BTCBox, Zaif, and Fisco exchanges.

Japan reported that Bitcoin trading volume in the country increased five-fold over the last four years to reach the US$97 billion as of March 2017. At least 3.5 million people are trading cryptocurrencies in Japan according to latest information from the country's Financial Services Agency, released after evaluating 17 different Japanese cryptocurrency exchanges.