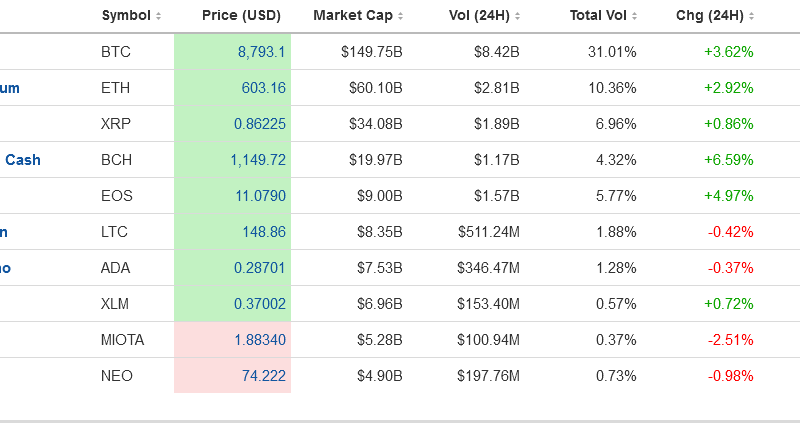 Last two weeks was "good" for the cryptocurrency markets as the entire market went up by more than 20 percent in value so far. Ethereum, Ripple XRP, and Bitcoin Cash all got a double-digit gains in the top five largest cryptocurrencies by market cap. There was renewed interest in cryptocurrencies this week as the U.S. tax season ended. Last week, some slight fall in price came as many people sold their holdings to avoid taxes on the Tax Day April 19. Since April 19, cryptocurrencies are now up and running.

Even as the cryptocurrency markets dropped down in the weeks preceding these gains, there were many market agreements, acquisitions, mergers and development happening in the space, and which could propel growth in the future. Even though cryptocurrencies, separately, might have been looking for a boost in their prices, these developments that have been happening even as the market tumbled could maintain future value and price rise.

For instance, many companies that were not in cryptocurrencies have since joined the space, either through funds, apps, mergers, realignments, service additions, or equivalents of hedge funds to pension funds. So in short, more monies are coming in and which could act as a basis for future growth.

Starting with Bitcoin, the cryptocurrency struggled to stay above $8,000 a few weeks ago but now gained more than 10 percent this week at the time of writing, and growing from last week's gain of below 10 percent.

Bitcoin was up to four weeks high after a long strive and a long-term bearish trend-line. Although the cryptocurrency gained the lowest of 10 percent in the list of top 10, the highest hit so far this week was today's $8900 after another notable high of $8285 on Tuesday and an $8360 on Monday. The current prices correspond to mid-March prices. After mid-March, prices fell below the $6,500 level Sunday, April 1. However, the price is now past the confluence of the trendline and the 50-day moving average (MA), confirming a bearish to a bullish trend change.

Some experts had earlier projected that the fall would continue in weeks unless the volumes started rising to reverse prices. Last week, some analysis showed that the cryptocurrency was now weathering that barrier.

There have been really nice positives about Bitcoin of late. Many think it is now weathering the "drop cycles and trend." Jacob Pouncey from the SaxoStrats in-house this week said the cryptocurrency could now be on its upward trend as a mixture of factors come to its favor. He said political uncertainty, credit access limitations, and volatile commodities could see new monies enter the cryptocurrency spaces in the future.

"Historically, many of the blue-chip cryptocurrencies have seen price increases in the face of global uncertainty and risk-off events such as Brexit, the election of President Trump, and the North Korean missile tests. The inflow of institutional capital to the cryptocurrency market due to the increase in regulation and investor protection could lead cryptocurrencies to a positive quarter.”

Earlier on, Fundstrat's Tom Lee said the cryptocurrency could see better coming days as Tax Day pressure comes off traders' backs. He also says Bitcoin could rise to $25,000 by end of this year. He told CNBC that almost all crypto events became taxable events and that brought some tax pressure. Still, low prices were propelled by fear amidst uncertainties like regulation, since January.

CEO of Pantera Capital Dan Morehead also said that it was time people considered  buying Bitcoins. He said since the cryptocurrency grew by 165 percent per year in five years ago, “something that grows that fast” will hardly get below its 200-day moving average.

However, the cryptocurrency did not rise in prices without surprises: the market share, which was last two weeks, fell below 39 percent for the first time since February.

Further, the cryptocurrency has recovered from some shock after two whales dumped a combined of $100 million in BTC earlier this week.

Ethereum, the second largest cryptocurrency in market cap, rose by slightly more than 22 percent this week so far and is now trading at above $600, which is a good sign of recovery since it has been struggling to reach $500 for many weeks, but still not yet there compared to the December price surges of well above $1000. But today's peak just signals that Ethereum could go further higher.

Ethereum crossed the $500 mark last Saturday, April 14 and has not gone back, and then crossed the $600 mark today. A few days ago, London Block Exchange (LBX) CEO Benjamin Davis said that institutional investors were not shying away from cryptocurrency investments as would be expected, and the exchange has seen "a notable increase in Ether" sent through it. And talking about institutional investors, there have been massive efforts in the last few months since January to bring more onboard.

XRP is still third largest in market cap, and rose by 40 percent over the last 5 days. However, the weekly gain is now 38 percent and the cryptocurrency is now trading at $0.877435. It is to be remembered that Ripple has been very active in market activity since January even as the prices went down.

For instance, the company has entered into agreement with several companies in the last few months including bank, which could see its value grow well in the future. For instance, it is now working with over over 60 banking and financial institutions in Japan and South Korea to see various implementation of its systems or their utilization by these firms. Most of these partnerships and agreements are targeted at improving global cross payments in future.

Bitcoin Cash is fourth largest by market cap and now trading at $1,173 and still leads in positive change in the last 24 hours.

Some changes were also realized in the top ten crypto listing this week as EOS became the fifth largest cryptocurrency by market capitalization. It is to be remembered that the cryptocurrency pulled another surprise in end month when it outgrew other cryptocurrencies to attain a 13 percent rise in the last week of March. This is even as other cryptocurrencies attained a mere lesser-than-12-percent growth in that week. Litecoin, which held fourth position, is now number 6.