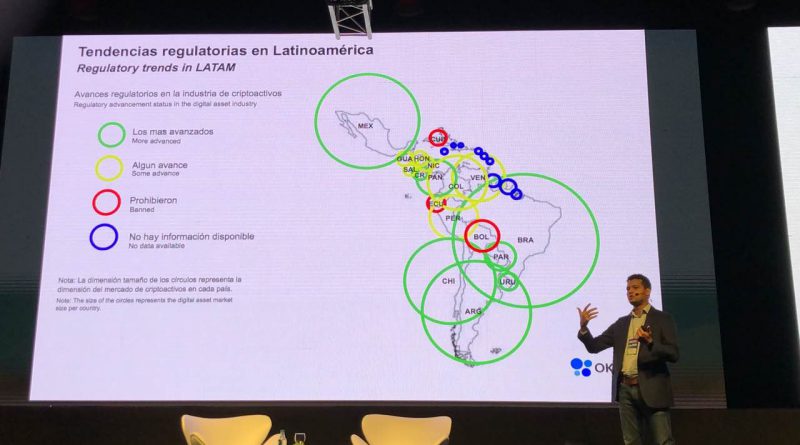 OKCoin has officially entered the Latin American market shortly after being awarded a license to operate in the region. They have also launched a fiat gateway to let customers trade cryptocurrencies for local fiat.

The cryptocurrency exchange is starting the expansion with operations in Argentina. The company will have an office in the country's capital Buenos Aires, where it will have its regional headquarters. It will set up a team that supports its business throughout Latin America. Starting last week, customers can now trade BTS, bitcoin cash, ETH, Ethereum Classic, Litecoin, Ripple, Cardano, Stellar, Zcash and 0x and more cryptocurrencies for local Argentina fiat, Argentine Peso (ARS). The press release said they will also be supporting more fiat currency options and digital currencies in the near future.

The number of Bitcoin ATMs in the country has increased from 0 to 30 in the recent past. After peso losing more than 50 percent of its value against the dollar so far in 2018, the inflation is expected to exceed 40 percent by the end of the year and if the situation does not improve, it would be a great opportunity for the cryptocurrency industry to grow in the country.

The interest rates in the country were raised in August, with the rate of borrowing shooting by 15 percentage points. The central bank said it would keep rates unchanged at 60% until at least December. However, the situation has been slowly improving since a plan involving the IMF was put in place last month.

Further, Reuters reported that the U.S. company called Athena Bitcoin, which specializes in cryptocurrency ATMs, is expected to launch about 30 ATMs by the end of this year. The ATMs would first support Bitcoin transactions but would expand support for other cryptocurrencies. U.S.-based Odyssey Group also said it was targeting at establishing 150 ATMs in the country and 80 percent of those would be operational within the first months of 2019. Octagon, which is owned by Odyssey, said they hoped to install about 1,600 bitcoin-enabled ATMs in a year. Their Bitcoin ATMs would allow bank transactions including depositing and withdrawing cash and transferring money between accounts.

The OKCoin exchange is, like Bitcoin ATM operators, is hoping to expand in other countries in the region beyond Argentina including Chile, Brazi, land Mexico.

The cryptocurrency has been expanding in various regions since the disruption caused by the China crackdown on cryptocurrencies last year. It was one of the largest cryptocurrency exchanges before the disruption. So far, the exchange is operational in the U.S. South Korea and in over 110 other countries since the start of this year. It offers fiat-to-crypto and crypto-to-crypto trading services in 20 states in the United States after securing a Money Service Business (MSB) licensure with the United States Financial Crimes Enforcement Network (FinCEN) in November 2017.