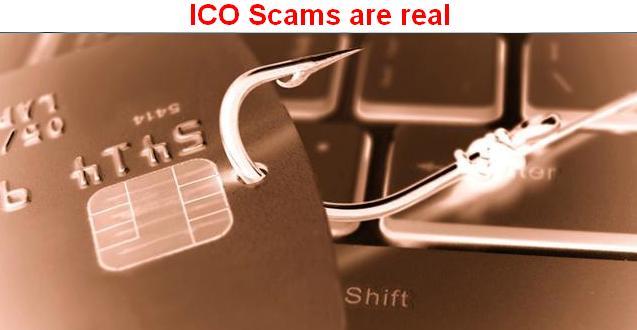 There are thousands of ICOs even going on right now but unfortunately, most of them are scams or fake and out to steal your money. Most of ICO scams target first-timers, but even experienced traders and miners fall into the spam trap.

Point number one that differentiates a good trader from a poor trade from day one of trading is the ability to detect scam or fake ICOs or at least the progression of the desire to. Mark you most scam ICOs that come from experienced scammers are hard to know or detect because even complicated computer-based techniques are used to spoof and woe people into fake and scam ICOs.

First of all, Geoffrey McCabe has written an article about the common techniques used by hackers to scam people in the ICO world, so be sure to check it.

Instead of trying to list all the ICOs we believe are fake -- and the number could go into thousands -- we will list some characteristics of scam or fake ICOs. Use as many techniques as possible to assess legitimacy, ingenuity, and viability of any ICO instead of using just a single technique.

1. ICO sites linked by a personal message on a slack channel

Fake ICO sites and cloned ICO sites are on the rise and they appear more real than ever before because the technology to aid cloning and emulation of trustworthy senders and websites is now much better. So you might get a phishing message that has malicious links that direct you to unsafe websites or cloned websites designed to look exactly like the genuine original ones, and hence participate in a fake or scam ICO.

Some links will even direct you to spoofed wallet addresses such that you send funds to the scammer's mixing pool instead of the ICO's multisig or wallet. After that, it is almost impossible to recover unless the whole chain is hard-forked or reversed and the scammer deposits are deleted.

Most scams of this nature advertise ICOs through emails and message boards (in platforms).

Most ICOs add in Slack or Telegram support to serve their community, but in some cases, because of the open nature of these platforms, it might be hard to know who the real and legit representatives of the actual ICO are. Some scammers create identical profiles similar to those of real ICO officials or hack programs and/or client software and send personal messages with pre-prepared messages and wallet addresses so as to direct users into cloned malicious ICO websites and wallets.

For now, do not trust links that are sent via Slack or Telegram. As a precaution, visiting the address by typing it into the address bar of a browser is much safer than clicking the links on emails and messages.

Some cons impersonate website addresses of very well known crypto domains and wallets in order to gain trust and then send links via messaging platforms. Always do your research to find out whether the said ICO and the website are just a spam or clones.

Funds do not get moved until the promise is delivered and deal sealed. Scammers play around the idea of this wallet by, for instance, creating a disguised profile to be party in the multi-sig escrow system such that 2 of the three parties are one and the same person and therefore the person can move the funds easily.

4. Nothing to offer in the whitepaper

For anyone willing to invest in an ICO, please check the ICO project's whitepaper for more technical and real information before moving forward. What you expect from a real ICO is high-level descriptions and specifications, step by step, about how the project will go on and how the technology works.

You will get charts, calculations, simulations, formulas and other specifications. Some ICO scams will not reach that level probably because they target unsuspecting investors who either do not have time to read whitepapers or do not know whether one even exists. However, many do.

While most ICOs do not have a product, their service description must be convincing. For a serious investor, these investments are high risk and so you want to be sure and thus you should go into understanding the ICO project details in the whitepaper, and that's how you will differentiate even a deeply hidden ICO scam from a good project that offers real meat. The question is do you understand the white paper well enough that you can defend the project?

Remember you can always get third party help in checking whether an ICO has anything good to offer so do not go on hurriedly and blindly unless you are sure the project is right.

Wings lists ICOs that have registered with it and some would shy away from registering because it can be hard to defend their projects in public or at the face of criticisms. But the analysis by third party tools can also help you detect those ICOs lying to you with a bold face.

Most ICO scams are easy to detect right away for their shady campaigns, but this tool goes further into giving you details of why certain projects aren't worthy your time and money.

You might also want to follow up discussions about the project at BitcoinTalk, a popular cryptocurrency forum where members even expose fake and scam ICOs.

Genuine ICOs always have code at repositories like Github or Sourceforge, which you could count on even if the whitepaper does not contain anything sensible. Some of the ICOs to worry about are those without code at all and those with just a clone with a few changed lines on the code.

Anonymity of developers should not be enough reason to reject an ICO project. Also, you cannot reject developers simply because they just entered the field the other day. They could shine like any experienced developers and that has been shown to be true.

However, if the developer has a profile to check out or has run any projects in the past, you might want to check whether those projects were successful because most scammers will always come back to steal more even when past projects were total scams. Do your research to find out who the developers or ask the online cryptocurrency community.

You can follow discussions about ICO projects on BitcoinTalk and see if the developers have had past projects as well as other details of their accounts. The forum could also mention scam projects or shady projects you need to shun. You need to go past that by asking and checking if the developer is running multiple BitcoinTalk accounts to promote his or her stuff or check why that could be so...it happens.

Fake and scam ICOs are interested in making their project statements and paragraphs and websites look and sound great, so there is a lot of buzzwords and absolutely nothing new for the reader and potential investor to learn. It turns out that the combination of attractive words, facts and new information will make a text look and sound great in the full description of the word great. \

If you are an investor who is interested in or who gets wooed easily only by attractive words, you might be in the wrong cause so please be sure to go deeper than that. Once you get excited with any ICO offer, know that the Fear of Missing Out (FOMO) is real and deal with it by taking time to decipher the facts from the company statements.

The first tact you can use to defend yourself against a fake or scam ICO -- or even an ICO not worthy your time -- is ascertaining that the project goals are indeed unrealistic. While an ICO could have a genuine interest for business but lack realistic goals (which is an indicator that you should not invest in it in the first place even if it was genuine), this strategy can help you deal with people out to steal your money through an ICO.

Most fake and scam ICOs boldly defend their projects and products but have nothing new or innovative features to offer in the market, so it is almost certain that their project will collapse after a while.

Besides, fake ICOs make vague claims. Usually, they will claim that they can get huge gains within short time but cannot back that up with substantial claims, or make weird claims like they will finally end all the global crises in the ICO world of computers and digits. Actually, instead of giving details of the project for anyone to assess and scrutinize, they are more fascinated with projections of a better future and better market prices and gains.

A lot of scammers have a lot of technical know-how, background and experience. They know a lot of things way ahead of potential investors and that is one reason many people get scammed. Most of scammers won't use fake pictures as their profiles because they know that there is a free software to detect picture forgery.

However, they might use this technique to aid other techniques in scamming. For instance, they could Photoshop pictures and put them on profiles of people you won't be interested in checking such as banking professionals they claim to be in partnerships with.

Finally, know who is up for what.