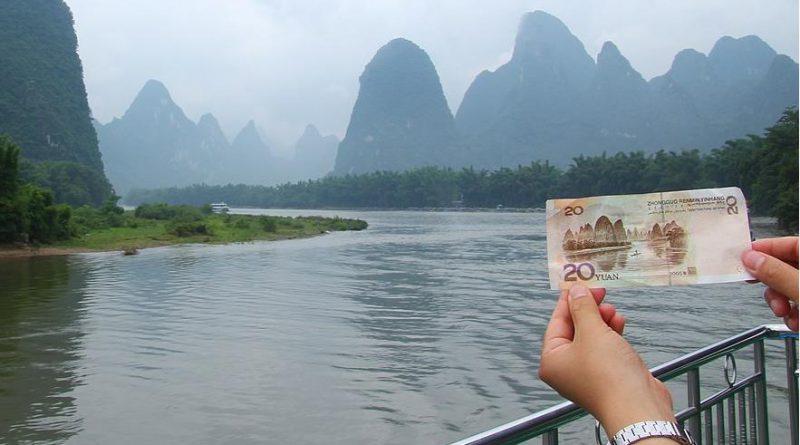 In the image: A fifth-series 20 renminbi yuan bill shown next to the location depicted on the bill (2017); Image attribute: David R. Tribble

Development of a digital currency by the People’s Bank of China [PBOC] will be implemented to help boost trade and deal with China's economy and resource issues, is nearly complete according to a recent announcement by Deputy Chief in the bank's Payment and Settlement Division Mu Changchun.

Changchun said during a recent China Finance 40 Yichun Forum that the virtual currency can now be said to be ready. According to the announcement, the research group from the bank has made a prototype and adopted blockchain architecture in the development of the coin. During implementation, it will act as an alternative to MO and so will not affect any current monetary transmission mechanism or other aspects of money in the global economy. Implementation and usage will also observe current regulations on cash management, anti-money laundering, and counter-terrorism financing.

China has close to 1.4 billion people in the population and high concurrency is needed in order for the digital currency to reach good impact at the retail level. Hence, the bank will adopt technical neutrality and will not presuppose technical routes in implementing the currency. Rather, they will not necessarily rely on a single technical route to achieve implementation to masses. The virtual currency will be implemented in a two-tier structure in order to deal with the difficulties of accessibility and public willingness to use it or in order to order to increase accessibility and willingness by the public to use it.

The first tier will see the bank converting and issuing to banks or other operating agencies, which will then transfer to the public in the second tier. The second tier not only encourages the participation of other banks and financial operators to ease access but also to encourage full play to the resources, encourage innovation, usage of talents and competition for excellence in implementation. It also distributes the risks related to its implementation and usage to many parties, which helps to avoid financial disintermediation. Commercial banks will pay the full amount or 100% of reserves to the People's Bank of China, which will also guarantee their liabilities with its credit.

The announcement follows research and development of the currency for almost 5 years since the formation of the Digital Currency Research Group in 2014. Unlike Bitcoin or other forms of cryptocurrencies, theirs will be a centralized digitized form of the renminbi.

In 2016, the then governor of the PBOC, Zhou Xiaochuan, announced the belief that digital assets will not immediately replace fiat currency. However, according to Xiaochuan, it was likely to soon better facilitate trade by reducing operating costs, increase efficiency, and enable a wide range of new applications.