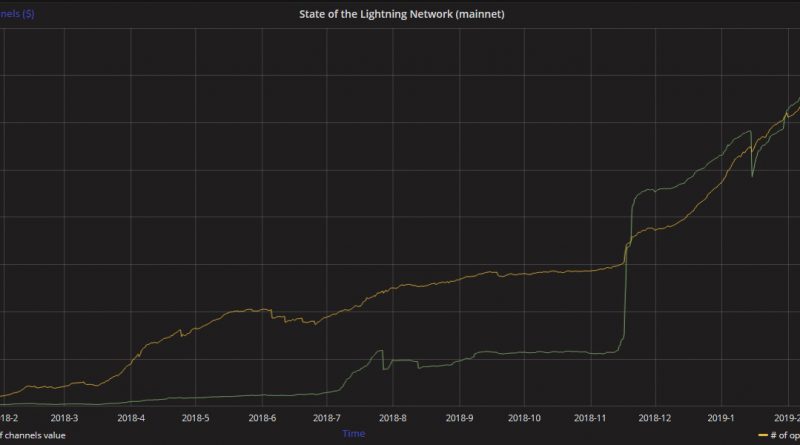 Lightning Network on Bitcoin has grown by a staggering 830% increase in capacity over the past six months according to a report by p2sh.info. According to the data shared, the Lightning Network facilitated transactions of 710 BTC worth, the highest since the LN nodes have begun operation.
This represents an increase of 28% in the last 30 days.

Most growth can be seen to have been taking place from November 18 last year where it facilitated the transfer of 338.5 BTC on the network. The growth accelerated to 551 BTC transferred on the Lightning Network nodes on January.

That's despite many proponents of peer-to-peer networks in blockchain saying that it is a move towards centralization of the network because it does not rely on peer-to-peer transactions between users. Indeed, some projects such as Digibyte use a different mechanism of scaling to solve transaction fees and speed problems on their blockchain. For instance, Digibyte uses DigiSpeed , whose block size doubles every two years. The platform now has a block size of 2 MB and can support around 560 transactions per second, and arguably has a block time of 15 seconds. The solution allows Digibyte-based platforms to scale while avoiding centralization or needs to trust third parties when making blockchain transactions.

Lightning Network was invented to add a second layer on top of the main chain to enable quick processing of some transactions off-chain. This was in order to reduce marginal fees and remove delays since these were becoming pressing issues on the Bitcoin network. The LN nodes have managed to reduce the transaction fees, which is currently around 1 Satoshi.

The best use case for Lightning Network is small value transactions or the so-called micropayments that can be costly to relay on the main chain. Recently, the Lightning Node enabled Chrome extension called Tippin was in the news for enabling Bitcoin holders on Twitter to send and receive tips over the social media platform using Lightning Network. Once it is enabled, a small lightning bolt icon appears on every tweet next to the direct message, like, and retweet icons.

Jack Dorsey applauded the Tippin app on social media and said it was an excellent move. It serves as a material alternative to the customary "like" on Twitter and a user will need to install the Chrome or Firefox extension and login on Twitter to use it. With it, users are able to reward other users for their content on social media. It makes Lightning Network easy to use by offering a custodial web wallet that any user can use to receive and manage their micropayments.

Although it is currently limited to Twitter, Tippin creator Sergio Abril plans to move it to other platforms.

The Tippin app also spreads publicity regarding Lightning Network alongside an initiative known as Lightning Torch. The latter initiative