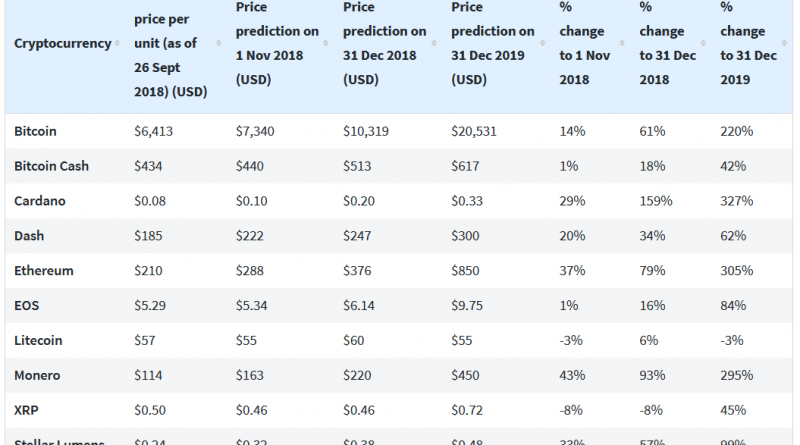 Even as many predictions about Bitcoin and other cryptocurrencies have gone so wrong so far, Finder has published its predictions on where the prices could be headed next. Predictions aren't perfect projections of prices, but Finder says Bitcoin is likely to close this year at above $10,000 then $20,000 by 2019. Surprisingly, all the projections are positive -- meaning all the coins and tokens will gain at price by end of the year -- which signifies a positive bias given that the market has been tumbling since the start of this year.

Their predictions are based on a panel of Fintech leaders they set up for this year's predictions and a new set of insights every month. It means most of the panelists predicted that price range for the cryptocurrencies. They asked the panelists to give predictions not just for the month of November and end of the the the the year, but also for 2019.

Finder.com also generate predictions of the ten cryptocurrencies by market cap, namely Bitcoin (BTC), Bitcoin Cash (BCH), Cardano (ADA), Dash (DASH), Ethereum (ETH), EOS (EOS), Litecoin (LTC), Monero (XMR), XRP (XRP) and Stellar Lumens (XLM). The panelists also provided their comments on new coins. They also calculated the market cap predictions based on the number of coins expected in circulation by end of the year and the panelists' forecast of each coin's value by end of the year.
Bitcoin will open November at above $7,300; Ethereum at $288 and Bitcoin Cash at $440.

According to them, Monero will see the highest gains in price changes upwards by 43 percent this month followed by Ethereum at 37 percent and Stellar Lumens at 33 percent. However, Cardano will win the race for price gains by the end of the year according to Finder, gaining 159 percent by the close of December this year. Monero will be second at 93 percent and Ethereum will be 79 percent upwards. Out of the top ten, Cardano will be $0.33 for each coin at the end of 2019, representing an increase of 327% and the highest gain among the top ten, followed by Ethereum which is set to gain by 305% to $850 by end of 2019 and Monero 295% to $450. Bitcoin will increase by 220% by the end of 2019.

According to Finder's panelists and analyses, Bitcoin, which has lost more than 50% of its value since January, has been forming a descending triangle on the price charts and continually establishing lower highs, refusing to fall below $6,000 but also attempting to break out the descending triangle without any success.

And although there are more bullish predictions for Bitcoin such as Cofounder at Satoshi School Joerg Molt's price prediction of $20,000 at the close of 2018, many panelists at Finder.com said the price will be between $10,000 and $12,367. Other lower prediction at between 5,200 to $8,000 by BitBull Capital COO Sarah Bergstrand, Spaceship Dealers founder Nir Rozin, and finder.com.au CEO and co-founder Fred Schebesta who were part of the panelists.

Many people have been attributing the fall of the price of Ethereum to the decline in ICOs that has led to the decline of its demand. A recent study also showed that most of the firms that held ICOs some times back sold to make profits of ETH before the decline of the cryptocurrency. The selling led to a further decline in prices.

Ripple, which has also been on a constant decline from the highest-so-far of $3.50 last December, has registered some appreciation during the year including becoming the second biggest coin in market cap in September. This was partly because of the then-upcoming release of the xRapid mainnet launched this month. xRapid is now been applied in production level. However, it remains to be seen whether the product will result in a further increase in demand for XRP.

Notably, cryptocurrency prices did not really even during the tense geopolitical events such as the U.S. – China trade war and Brexit-related issues.