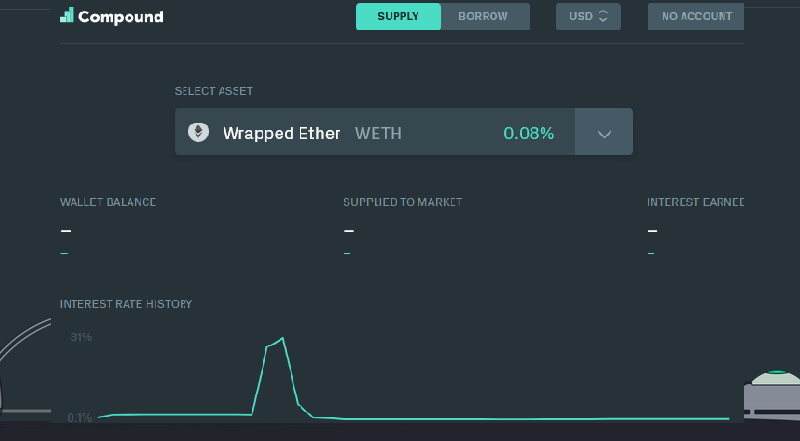 Compound, an upcoming cryptocurrency platform and investment platform which is backed by Coinbase among other cryptocurrency firms and funds, has launched following months of development and ahead of its’ previously planned launch in October.

Both the short selling and lending features are ready. Following this launch, customers of Compound can now short Ethereum, 0x (ZRX), Basic Attention Token (BAT) and Augur (REP) through its easy-to-use minimalistic website. This can be done through the Compound App, which is accessible using a Web3 browser such as MetaMask or Coinbase Wallet or other DApp browsers supported on the website, and an Ethereum address. After visiting the Compound platform, a customer is able to view the rates of interest for borrowing and shorting as well as well as income expected for each cryptocurrency supported. There is also a transparency dashboard to inspect all the earnings and belongings.

With short selling, a person can borrow the cryptocurrency and sell it at a higher price to then buy it later at a lower price when it depreciates. The person then pockets the difference.

The platform also allows users to lend any amount of the four types of tokens and earn interest and earn passive income on the same. This serves the demand for those who want to buy ICO tokes or to purchase other assets with crypto coins. It also serves the demand of those wanting to use Ether as fuel to power smart contracts and Ethereum transactions.

In addition to allowing customers to short Ethereum-based tokens, the platform has received an external security audit from Trail of Bits and Certora. Currently, more than 26 hedge funds including Digital Asset Fund, AlphaLab, Wyre, and Ikigai, plan to use the platform.

The startup, whose intentions is to revolutionize how money moves in cryptocurrency industry by coming up with algorithms, uses an algorithm to determine demand and supply and hence the interest rate for lending cryptocurrencies but the APR ranges from 5 to 45 percent.

The company is also planning to launch an in-house stablecoin to make it more useful for financial institutions who want more liquidity, better experiences and of course while avoiding volatility.

“Leverage is the primary source of borrowing demand for a stablecoin, such as TUSD, but users can also convert it into USD for real-world purchases,” Compound’s Founder and CEO Robert Leshner said.

He said at launch that while blockchain assets are "novel and exciting," they lacked the most fundamental financial infrastructure -- efficient interest rates. He said that cryptocurrency sector will witness the tokenizing of hundreds of trillions of dollars overtime but institutions that tokenize them will still need traditional financial markets to survive.