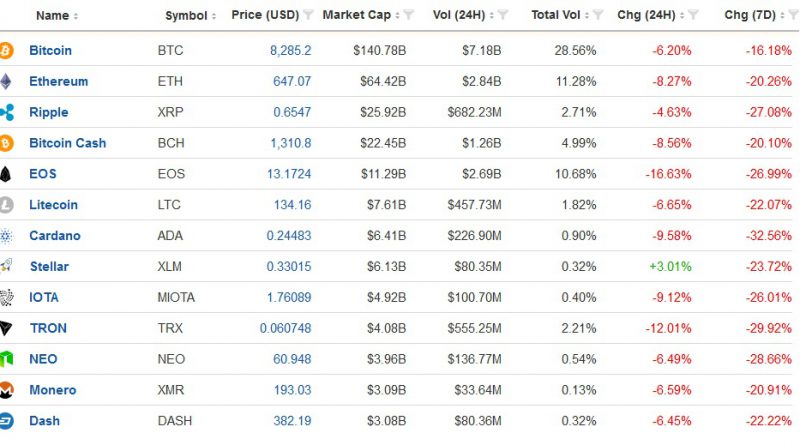 In fact, the market cap for all cryptocurrencies was sitting comfortably at $440 billion on Thursday but finally lost a total of $50 billion in less than 24 hours later.

Reportedly, the Mt. Gox trustee has recently dumped over 8,200 BTC using four BTC addresses in the less than forty-eight hours ago. Given that the daily volumes of all cryptocurrencies are very low, it is obvious that moving even less than a billion dollars in crypto exchanges could drastically affect the market and rates. And while it is usual practice for sellers disposing of off thousands through an over-the-counter method to avoid affecting the prices, Mt. Gox trustee chose to use crypto exchanges, creating a domino effect across the exchanges.

The trustee was ordered by Japanese authorities to sell off over 200, 000 BTC and convert to Japanese Yen in order to reimburse creditors. Mt. Gox trustee released a report in Spring this year detailing how around 34,000 to 35,000 of Bitcoin Cash and Bitcoin respectively have been sold this year.

Zooming into each cryptocurrency, Stellar dropped 25 percent, the highest among top tens, Cardano went down 24 percent, Ripple lost 21 percent, IOTA lost 20 while Tron lost 18 percent on average. The losses appear to be continuing when looking at the current 24-hour change in prices.

Bitcoin also tumbled 10 percent in the week till Friday. The drop marks a $1,200 drop in only five days. Bitcoin dropped below the $9,000 mark and to $8,511 on Friday, its lowest price of since April 20, after news that Prosecutors raided UpBit, the fourth largest cryptocurrency exchange worldwide and largest in South Korea by trading volume. On Thursday, while Bitcoin fell 5.5 percent in response to the news, the price of Ethereum also responded by dropping 11 percent. Most other cryptocurrencies also attracted a double-digit fall with Ripple going 17 percent down and EOS 19 percent.

Reportedly, the officials took away books and hard-drives for audit purposes saying analysis would take days. The authorities accused the exchange of carrying out fake balance sheets to deceive traders and investors. Under such circumstances, traders shy off and most people withdraw their funds in panic. The police officers said the exchange is selling cryptocurrency it doesn’t hold The exchange has a volume of more than $2 billion. They have confirmed that they are working diligently and that all assets were secure and transactions and withdrawals are operating normally.

The above performance for cryptocurrencies just signals the average loses in prices for the past seven days. However, there were lots of positives when zooming further in on the main cryptocurrencies. Bitcoin, for instance, had its own ups in the week, reaching the highest price in two months at $9,941. Again, Ethereum hit a high of $829 on Sunday May 6, which is also the highest in 2 months. The same case applied for Ripple which hit the highest price possible in the last two months. Bitcoin Cash hit a high of above $1800, which also happened to be the highest in 4 months. Therefore, at the start of the week, cryptocurrencies had set a good pace upwards. Actually, most of the trends had been positive in terms of weekly average gains as of this Wednesday when the trends reversed to negatives.

Nevertheless, it is also noteworthy that all cryptocurrencies, or at least most are assuming the same trends. Ripple, which has since fallen from a previous $0.80 position to around $0.66 at press time, continues to grow in partnerships. Recently, it has witnessed a successful pilot of the xRapid platform and performed inter-bank transfers between the United States and Mexico. The project will see it lower transaction costs by as much as 40 to 70 percent and transactions take only three and five seconds.

For Bitcoin, there is no doubt that $10,000 is a psychological mark for right now. Many believe that once that mark is crossed, the prices may rise further.

In other news, the first ever regulated Ethereum futures started trading on Friday at 4 p.m courtesy of Crypto Facilities, a UK-based cryptocurrency trading platform. The product will enable investors to take a long or short position on the cryptocurrency. This would allow them to “broaden investment opportunities and manage risks more effectively.” The company already offers Bitcoin (BTC) and Ripple (XRP) futures. Chicago-based Akuna Capital and London-based B2C2 will provide liquidity for cryptocurrencies.

And even as Ethereum faces uncertainty of whether qualifies as a security, CEO of Crypto Facilities Timo Schlaefer said,

“Whether Ethereum is a security is a matter for different jurisdictions to decide. Crypto Facilities is a derivatives platform and complies with the applicable regulation.”

He said the new instrument will attract more investors to Ethereum.

Meanwhile, Ethereum Foundation cofounder Joseph Lubin has refuted claims that Ethereum qualifies as a security. He said during a Collision tech conference in New Orleans on May 2,

"We spent a tremendous amount of time with lawyers in the U.S. and in other countries, and are extremely comfortable that it is not a security; it never was a security… many regulators that matter understand what Ethereum is.”

Elsewhere, Voatz’s blockchain voting platform also became the first platform in U.S. to record votes using Ethereum blockchain, during the West Virginia's primary election that closed on May 8. The test-only solution for now, facilitated voting among Americans eligible to vote absentee under the Uniformed and Overseas Citizens Absentee Voting Act (UOCAVA), their spouses and dependents, as well as deployed military members. The test was also limited to Harrison and Monongalia counties out of the 55 counties of the state.

"We're genuinely hoping that will allow this type of a mobile app to be made available in the future – as early perhaps as our general election – to military voters."

Winklevosses brothers secured a patent for a system to transact exchange-traded products (ETPs) using cryptocurrencies. It is the first stage towards their plan for a crypto ETF. Also, Bloomberg, Novogratz’s Galaxy Digital Capital teamed up to launch a crypto index fund to track the prices of Bitcoin, Ethereum,, Ripple, Bitcoin Cash, EOS, Litecoin, Dash, Monero, Ethereum Classic, and Zcash.

Nevertheless, crypto enthusiasts expect the prices to recover in the coming weeks. Elsewhere, major cryptocurrency conferences are coming to New York in the next week. Blockchain Week New York is expected to attract more than 8,000 attendees and will feature talks from the likes of Twitter chief executive Jack Dorsey on Monday, St. Louis Federal Reserve Bank president James Bullard and European Parliament member Eva Kaili. The event will run until May 17.

While it is not known how much they will affect prices, significant gains were seen last year in the crypto market, with Bitcoin alone accelerating $2,000 during last May's conferences. This, however, is a regular occurrence. Conferences do affect Bitcoin price sentiment. Fundstrat Global Advisors told CNBC's Fast Money that Bitcoin prices shot every year after the Consensus conference.