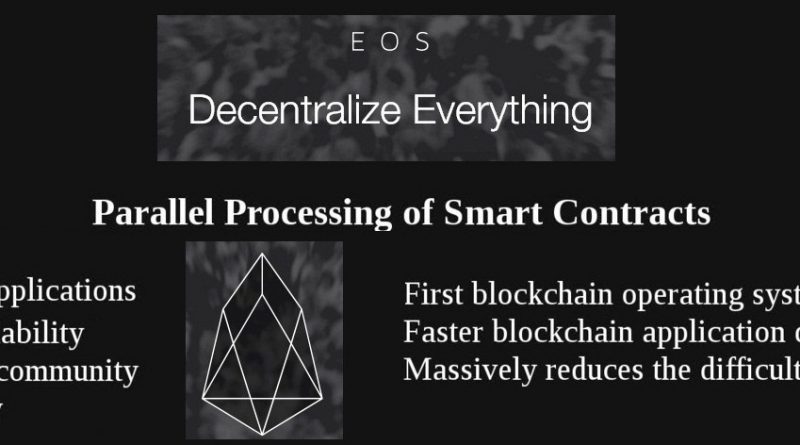 E0S, which uses an Ethereum like technology on the blockchain, is the brainchild of one Dan Larrimer who also created Steem and Bitshares, both of which are quite successful projects.

EOS raised a record $150 million in just 5 days during its ICO and it made a debut on the Bitfinex two months ago where it pumped the price by 200 percent in two hours.

The coin has shown some considerable progress and has several advantages over Ethereum – being a direct competitor of Ethereum – although, because it does not have a considerable community backing it up, it is too early to completely predict its future.

EOS works like a decentralized operating system, which in practice, implies that developers can build their own decentralized cryptocurrency applications on the EOS platform for their business needs. Whoever owns EOS coins owns a claim on the server resources because developers need to own EOS coins in order to use the platform. This doesn't, however, mean that the developer has to use the coins in order to use the server resource.

EOS allows developers to craft applications for the end users to easily interact with. The applications on E0S will have capacity to communicate with each other, share frameworks and libraries. This will make development much faster, less technical and more secure.

EOS will make the interaction completely transparent to the users, which is good because elsewhere, most end users may be unaware that they are interacting with such an application when using EOS.

The tokens can be staked to power the blockchain's bandwidth, computational power and storage capabilities. There will be no mining. For those willing to exploit the mining channel, set your miner to any Ethereum pool of your choice, convert the earned Ethereum to EOS at the EOS website using their token distribution web interface.

EOS has several strengths that are giving Ethereum and other cryptos a run for their money. These strengths include:

- Parallel processing which enables higher transaction speeds and much more scalability. It can process millions of transactions per second thanks to the horizontal scaling, thus beating Ethereum and Bitcoin.

- Governing principles or a constitution that every stakeholder agrees upon. These set of rules are attached to every block mined. It is the first crypto to have a constitution.

- EOS is self-sufficient and evolutionary. The current model of EOS gives room or a 5°/o inflation, which will in turn, be used in further developing the network.

- Unlike its main competitor Ethereum, EOS doesn't demand its users to pay for every transaction, something that will help increase adoption. It is free to transact.

- It is possible to create ERCZO-like tokens on E0S, which means that ICOS can be hosted on the Blockchain. Ethereum does very little to make interaction with their Blockchain a friendly process.

With all those features and strengths, EOS is not without a fair share of challenges. The challenges include:

- The creator of EOS, Dan Larimer, is known for moving on to the next thing. He did it with Bitshares and Steem. While this isn't necessarily a bad thing, it may be of the project's undoing if the timing isn't right.

- There are other competitors in the ICC market other than Ethereum. Examples include RootstockISK, Crown and RChain; which haven’t released their decentralized platform suites. Once they do, their platforms maybe cheaper and easier for developers to use.

So is it a good investment?

This maybe a tricky question considering EOS’s position in the market at this time. Currently, the ICC market is quite agitated and the mania could be a factor in purchasing high priced tokens with a weak regulation around the tokens.

This operating system will be hosted on data centers or servers which will also double up as clock producers. The block rewards in EOS are the incentive for these servers to host EOS applications.

EOS is still at its infancy stages and has some ground to cover before being considered a big boy. On the other hand, EOS is a first. It is the first decentralized operating system. As is with any risky investment, returns on E0S could be high if things are done well and right.

It is a good investment relative to one’s personal risk in light of investment portfolio, so ensure to follow the basics of investing in high risk businesses as we have already said before.