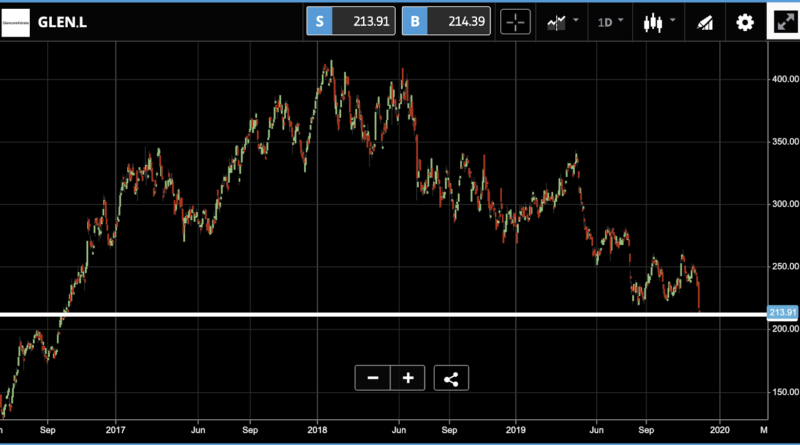 Highlights from Adam include: Mining giant Glencore’s share price sank by 9% after the Serious Fraud Office (SFO) announced that it has launched a bribery investigation into the firm. The scope of the inquiry has not been shared, but it was opened in June and involves “the conduct of business by the Glencore group of companies, its officials, employees, agents and associated persons”. Sources familiar with the matter said that the SFO was recently seeking information on Glencore’s involvement in the Democratic Republic of Congo (DRC).

Glencore is no stranger to legal troubles. A year ago, it was fined $22m by the Canadian regulator over its transparency on its dealings in the DRC. Last July it was also ordered to hand over documents to the US Department of Justice related to money laundering. The company’s share price has now fallen more than 25% year-to-date, and earlier this week CEO Ivan Glasenberg signaled that he may leave next year. Shares are now trading at a 2 year low as a result.

Vodafone made a surprise announcement this morning that it is replacing the standard credit card-sized SIM holder with a new half-sized format that reduces the amount of plastic used to produce SIMs by 50%.

Part of a wider strategy to minimise the company's use of all non-essential plastics, Vodafone Director of External Affairs, Joakim Reiter said: "Halving our environmental impact means not only tackling material issues such as our carbon footprint and e-waste, but also taking action in other areas where we have an impact, such as the non-essential or disposable plastics we use in our retail stores and offices.”.

Nike puts its running shoes on

The major US stock indices are still on track to finish the week at a loss, bar a major gain today. However, they closed marginally higher on Thursday after a spokesman for China’s ministry of commerce said that trade deal negotiations were progressing. As we noted yesterday, markets are moving on any and all trade deal news, so be wary of how much you read into the headlines.

Nike was one of the biggest winners on Thursday, climbing 2.2% after Goldman Sachs upgraded the company to a buy rating, added it to its “conviction” buy list and raised its 12-month price target to $112 from $95. Analyst Alexandra Walvis described the firm as “a unique asset” on the cusp of a multi-year period of growth, with a promising outlook for the firm’s prospects in China.

Apple, the world’s largest publicly traded company at a market cap of $1.18trn, saw its share price climb by 1.5% after Citi analyst Jim Suva boosted his earnings and price estimates. He predicted that the firm will have a strong holiday season in part driven by demand for its wearable items.

Sterling pounds away at the FTSE

A jump in the value of the pound due to anticipation of a Conservative majority in the imminent general election was the biggest factor for the FTSE 100 yesterday. Sterling has been climbing against the euro and dollar all week but spiked on Thursday - passing $1.31 and closing in on its $1.33 highs from February. In the first half of October, Sterling was trading as low as $1.22. A strong pound generally leads to a fall in the index, as its constituent companies make more of their money overseas in other currencies. The more domestically focused FTSE 250 climbed 0.2%. The gap between the performance of the two indices is now more than 12 percentage points year-to-date. In the FTSE 250, carmaker Aston Martin Lagonda’s share price soared by 18.39% on reports that billionaire Lawrence Stroll is leading a group of investors considering making a bid for a stake in the firm.

US economic data: Today is a big day on the US economic calendar. Nonfarm payrolls will be released, a measure of the total number of paid workers employed by businesses, along with the unemployment rate and consumer sentiment index. Economists are expecting job growth in November to be strong, with more than 180,000 jobs added. In October, the figure came in at 128,000, but was negatively impacted by the General Motors strike, which wiped out more than 40,000 jobs from the total expected. The number matters because it is one of many signs of the relative health of the economy, and has impacts on currencies, stocks and more. In particular, investors will be interested in the strength of the economy and consumer sentiment heading into the holiday spending season. It is a hugely important time sales wise for stocks ranging from retailers to consumer tech companies.

Big Lots: Now that we’re out of the main Q3 earnings season, the number of companies reporting earnings has dropped off sharply. However, one of note that may be of interest in the US on Friday is retailer Big Lots. The $800m market cap retailer has more than 1,400 stores nationwide and has lost around 50% of its value since April of this year. It now trades at a price-to-earnings ratio of less than five, based on its trailing twelve-month earnings. The average 12-month analyst price target on the stock is $26.40, versus its Thursday close of $19.16.

Bitcoin jumped back above $7,300 and held on to gains today, with the cryptocurrency asset holding steady at $7,345, amid hopes of a pickup in sentiment in the holiday season.

This pattern was mimicked by the other two leading crypto assets, Ethereum and Ripple, which were off lows seen earlier this week. Ethereum was trading at $146.6, up from $144 yesterday, whilst Ripple was knocking on the down of $0.22, trading just shy of that figure.

India to launch its own digital currency

Yesterday we learned about Banque de France’s foray into cryptocurrency, overnight it emerged that the Reserve Bank of India, the country’s central bank, is also developing its own sovereign digital currency. However, the Bank was also scathing towards existing crypto assets, saying any mandate would not be handed over to a private company to handle.

Bakkt CEO appointed to US Senate

Kelly Loeffler, the CEO of institutional futures platform Bakkt, will replace the outgoing Johnny Isakson in the US Senate. The staunch conservative has openly made comments in support of President Trump, although it is believed the President actually favoured another candidate, believing Loeffler to be too moderate.

Our Telegram for more news: https://t.me/cryptomorrowcom