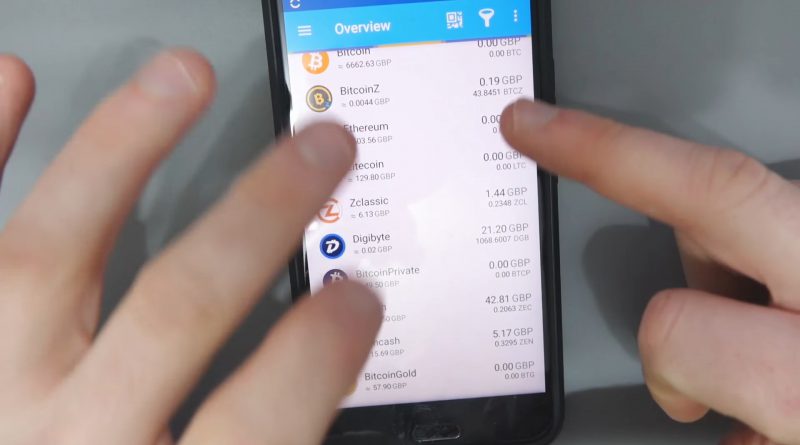 In choosing the most secure cryptocurrency wallets, you might want to check for other features including ease of use, mobile support, availability of customer support, and the number of digital assets supported, among others.

So here is a list of top and popular cryptocurrency wallets that support multiple assets. A number of wallets in this list also do have in-app exchange features.

Coinomi supports 507 different digital tokens although it is actually thousands of assets since you can add any ERC20 token yourself. It also supports 125 blockchains, the largest number in the market. Besides, this crypto wallet used to be available only for mobile devices (iOS and Android) but now there is a desktop version coming in Q3 of this year. The desktop will be available for Windows, MacOS, and Linux. Of course, hardware wallets are considered more secure for a large number of cryptocurrencies.

Coinomi has already integrated with ShapeShift and therefore has a built-in exchange or the feature that allows you to convert between Altcoins instantly from within the app.

Exodus supports more than 90 Altcoins and digital assets, and like Coinomi, integrates with ShapeShift, making it a good crypto wallet for those looking for in-built exchange features to do crypto swaps. It can also be used as a portfolio management tool just like Coinomi.

The crypto portfolio management features include live charts to help track your portfolio in real time as market conditions keep changing. It also packs alert for real-time actions, chat, and other features.

Exodus is only Windows, Linux, Mac-supported and there is no mobile support yet, although that might come in the future according to their website. Still, many people prefer to handle crypto transactions on desktops.

Jaxx is a multi-asset cryptocurrency wallet that has been around for quite some time now since 2014. It also supports multiple platforms -- desktop (Windows, Linux, and Mac) and mobile (Android and iOS) and there is a Chrome Extension with which you can use the software on browser.

Like other top crypto wallets in this list which support multiple currencies (more than 20), you can also swap between cryptocurrencies within the app because of the in-built exchange features. So you can trade, spend and receive Jaxx all in one platform.

Jaxx reported in March that there were 1.2 million downloads of its software since January 1st, 2017 and started this year with more than 700 k users.

There is a new Jaxx Liberty in beta.

In terms of security, the private keys, which are held by owners on their devices, are backed up by a single 12-word mnemonic that can be used to pair the wallet on multiple devices.

Cryptonator, like most of the multi-asset wallets in this list, supports multiple crypto assets (more than 20 assets) and has in-built cryptocurrency exchange and works on laptop, desktop or mobile devices alike. It is popular among a number of users because it supports a number of Altcoins not supported by the mainstream wallets and exchanges.

The major deviation for this crypto wallet is that the company holds private keys for customers, which is equivalent to handing control of funds to the company. Nevertheless, they take sufficient steps to secure the funds with bank-grade security measures, 2-factor authentication with One-Time-Passwords, and hashing of critical data using the SHA-256 cryptographic algorithm.

Also, it now supports instant exchange between different currencies -- and without fees -- thanks to internal exchanging features.

The company also provides other services such as merchant tools to allow checkouts with cryptocurrencies and payouts to banks in USD or EUR. For SEPA payments, you can pay invoices, request or send payments by email.

You can also use the software as a portfolio management tool where you can add over 500 cryptocurrencies and track their value in USD, EUR, GBP, RUR, AUD, other fiat currencies.

Agama, which is still under development, supports Linux, Windows and Mac OS and the mobile Android app is in beta testing since January this year. The relatively new crypto wallet is developed by and is an official wallet for Komodo which works on the Komodo blockchain. It allows you to download the blockchain of each coin that you use, or you can utilize it in the basilisk mode which is a bit slow.

It uses an in-built instant cryptocurrency exchange called EasyDEX which can be used to instantly easily exchange and transfer their tokens using automatic swaps. Remember Komodo's decentralized exchange BarterDEX supports trading between coins that are based on the Bitcoin protocol and also tokens based on the Ethereum protocol.

Atomic swaps are those that happen on the Bitcoin protocol and those swaps with and on Ethereum protocol are referred to as-as “atomic swaps.”

The wallet supports Komodo Token (KMD). Like most wallets in the list, it does not hold private keys for users. Rather, the private keys are located on your device.

imToken is a project of ConsenLabs, which is a Chinese company, and was released in 2016. It supports Android and iOS platforms and is ERC-20 asset tool.

It features an in-built token exchange based on the Kyber Network and the 0x Protocol, allowing you to seamlessly exchange different cryptocurrencies within a single platform without the need to transfer assets elsewhere. It features decentralized order matching (on order books and spot trading) for high transparency and secure trading experience via smart contracts.

The private key is stored on the user's phone and you can use an old phone to sign transactions offline and broadcast them with a different one thus increasing security. You can also manage multiple-chain using Mnemonic passphrase.

Edge wallet is also among new multi-asset digital crypto wallets that launched in 2014. It now works for Android and iOS and supports 12 digital assets among them the most popular -- Bitcoin, Eth, Litecoin, Monero, Ripple/XR, Pand Bitcoin Cash and Dash. You can use the app to manage multiple wallets for multiple assets with only username and password without the complications of adding complicated backups like long passphrases, lengthy strings of random letters and numbers.

It uses ShapeShift’s technology and therefore, you can store, send, receive, and instant exchange cryptocurrencies. It also features in-app buy, sell features to allow you to exchange fiat for digital assets.

CoinPayments is a web wallet that supports over 800 altcoins and coin auto-conversion feature for some of the coins and includes GAP600 Instant Confirmations for Bitcoin to quicken Bitcoin payments, which saves you the trouble of moving funds wasting time and fees.

Ideally, you can use it for storing multiple coins although CoinPayments facilitates merchant payments allowing people to receive crypto payments on their stores and receive settlements directly to their bank accounts. For merchants, it has shopping cart plugins for Shopify, Woo Commerce, and other Carts.

The firm features mobile apps (Android and iOS) to access the accounts, accept payments and convert payments in addition to the merchant tools. It is being used by over 2,215,500 vendors across 182 different countries.

It therefore also serves institutional custody needs for investors who need highly secure storage and custody; self-managed custody for investors interested in more actively managing their digital currencies; and are planning to bring on qualified custody.

With BitGo Instant, customers are able to complete on-chain, zero confirm, instant transactions between themselves and it uses ShapeShift technology to allow instant conversion of assets. The Instant wallets consist of three keys, one held by BitGo, one held by the user, and one held on behalf of the user by a third-party Key Recovery Service (KRS). Two signatures are required in order to complete a transaction on the multi-sig wallet.

Coinbase works for Android, iOS and the web and supports BTC, BCH, ETH, LTC and integrates with ShapeShift and therefore has an in-built exchange.

In addition to allowing users to trade different coin pairs, it also works as a custodial wallet to store user's private keys but with 2FA, multisig, cold storage as extra security measures.

Blockchain.info was released in 2013 and works on Android, iOS and the web. It supports BTC, ETH, BCH coins and uses ShapeShift enabled built-in exchange. The service also allows users to purchase crypto with credit cards. It uses 2FA and multisig security.

To use the atomic wallet swap exchange, a user requires creating a wallet, topping up the wallet and selecting an order from the BitTorrent order book to enter an amount to swap or coin to receive and confirming. The other party will receive a notification, confirm the swap and both parties will receive their coins after checking the contracts.

The exchange features do not need any registration, allows the exchange of an unlimited amount, offers a fixed exchange rate and allows a direct exchange of one coin for another without the use of an intermediary pair (and through a user-to-user exchange).

The wallet works for Windows, MacOS, Ubuntu, Debian, and Fedora as well as Android and iOS.

Freewallet is a web, Android and iOS wallet that was introduced in 2016. It supports 25 popular cryptocurrencies including the most popular and features a Changelly-enabled internal exchange and therefore enables instant and fee-free transactions within the wallet.

It also supports multi-sig features, and in addition to having 2FA, pin-code and Fingerprint support, coins are held in cold storage.

BRD wallet was released in 2016 and features an Android and iOS application. It supports over 100 cryptocurrencies and altcoins including Bitcoin and ETH. With it, users are able to purchase Bitcoin through a bank account transfer, with a credit card via Simplex, and with BCH and ETH via Changelly.

Bread Wallet is a mobile wallet and a decentralized financial services company. It also features Bread token, or BRD, internal crypto that allows users to deposit funds to one another, receive payments, and pay for a wide range of services and goods including music, food, transportation, and bills.

The app now features in-app crypto trading through the new ‘Augustus’ wallet announced in May thanks to integration with Changelly API.

With it, users have control of their private keys.